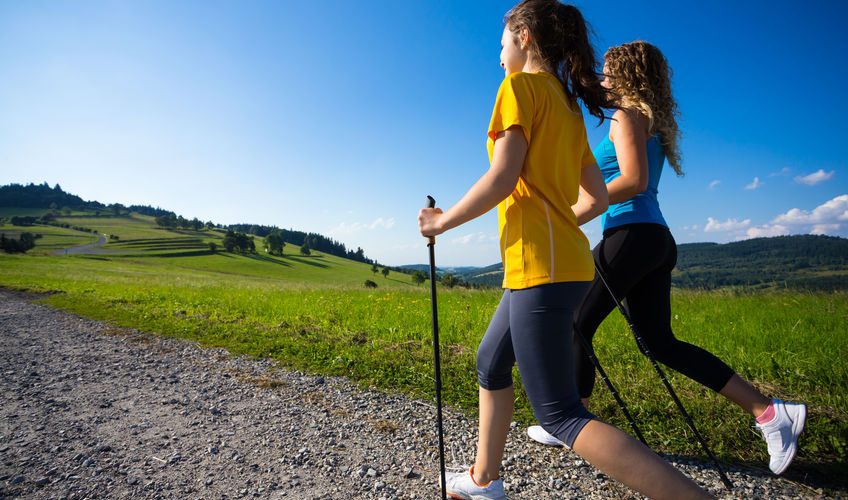 Can we improve our physical condition and health with recreational activities other than sports, as we traditionally understand them? Nordic walking is one of the fastest growing forms of outdoor physical activity. It is used in the prescription of rehabilitation and health improvement programmes as a vector of prevention, treatment or recovery in different pathologies, as well as in the field of sports performance and competition. In this article we are going to talk to you in depth about this discipline.

What is nordic walking?
It consists of adding the active use of a pair of walking sticks specially designed to adapt to the natural way of walking, helping to propel forward during walking (INWA, 2011). The use of poles with a correct technique does not modify the biomechanical pattern of walking, nor does it imply postural alterations or forced gestures.

The most widespread technique in the world and the one that seems to bring more benefits in the field of health has the name of “diagonal”, and was initially described by INWA (International Federation of Nordic Walking), although it is not exclusive to it.

Why practice nordic walking?
Walking sticks are not used exclusively as a support element that provide stability, but also allow the activation of the upper part of the body by exercising an active push during walking, putting into operation muscles that do not work when walking without walking sticks and working symmetrically both sides of the body (Gonzalez, C. 2017).

In addition, it makes it possible to divide the work between the upper and lower parts of the body, generating a subjective sensation of less effort, although the energy expenditure is greater because it involves a greater number of muscle groups.

We can say that it is a safe and accessible activity for all and can be practiced from different areas: educational, health, social, family, work and competition.

What are the benefits of nordic walking?
Nordic walking programmes provide different physiological and psychosocial benefits provided that the practice is regular, progressive and individualised and directed by a professional.

This discipline improves the muscular development of the upper part of the body. The use of canes activates the muscles of the shoulder girdle (especially the anterior deltoid), muscles of the upper extremities (particularly the triceps brachial and forearm muscles), dorsal muscles (broad dorsal muscle and round-major muscles) and muscles of the chest and abdomen (major pectoral and oblique abdominal muscles). Most of these muscles are responsible for maintaining the body posture, work that justifies the practice of this sport. Not only does it increase exercise tolerance, but it also improves trunk muscle development (Hanuszkiewicz et al., 2014).

In addition, psychosocial benefits are obtained as a recreational activity, it can reduce the level of depression and anxiety and improve mental and social mood, producing a positive effect on quality of life (Hanuszkiewicz et al., 2014).

Nordic walking can be practiced individually or in groups. When done in company, social interactions are enhanced. The person feels that he is part of a group in which he shares experiences, fears and concerns, and normalizes his personal situation in the event of suffering any type of illness. All this makes it an attractive activity and easy to adhere to other activities that promote health.

Nordic walking and cancer
The importance of physical exercise as a useful tool for the prevention, treatment-control and recovery of different pathologies has been shown in several studies and researches. There is scientific evidence, although little, of how through nordic walking improvements are achieved in diseases such as fibromyalgia, lung diseases, cardiovascular diseases, arthritis, diabetes, low back pain and cancer.

Cancer remains one of the world’s leading health problems. Breast cancer is the most common cancer in the European Union and the most common tumour among women worldwide. It has been shown that physical activity reduces the risk of this disease by 38% and that, in patients with this disease, survival is increased.

The benefits of nordic walking in this population are multiple because of the effect of walking sticks on the operated arm [Malicka et als. (2011), Jonsson & Johansson (2014)]. Muscle endurance in the upper extremities is increased without increasing the risk of lymphedema and improves shoulder mobility. In addition, good learning of the technique favors and improves venous return and lymphatic circulation. It is therefore advisable to practice this sport at different stages of the disease: during adjuvant treatment and in patients with breast cancer and lymphedema (Malicka et al., 2011; Jonsson & Johansson, 2014).

Under a collaboration agreement between the University of Seville and the Oncoavanze group, they have been working for four years on the VidaON project with the aim of improving the quality of life of women with breast cancer through physical activity, leading to a change in healthy habits and adherence to physical exercise.

The Nordic Walking programme is carried out with a frequency of 2-3 times/week in sessions of one and a half hours. It has been purchased that those patients who train regularly, decrease and cope more effectively with the effects of treatments (joint pain, body weight, fatigue, shoulder mobility problems and lymphedema), also improving psychological aspects such as anxiety, low self-esteem, body image perception and safety, among others.

VidaON contemplates different approaches to work, training, research and competition. It is spreading through different locations in collaboration with the club Grazalema Nordic in the field of health and competition and with associations such as the AECC.

And… why not unite health and competition?
Team competition provides values such as: personal improvement, individual measurement of effort, limitations and individual possibilities and motivation.
To feel the same as the others and to be able to carry out a test next to other people who have not suffered from the disease is a challenge. Come and walk with us! 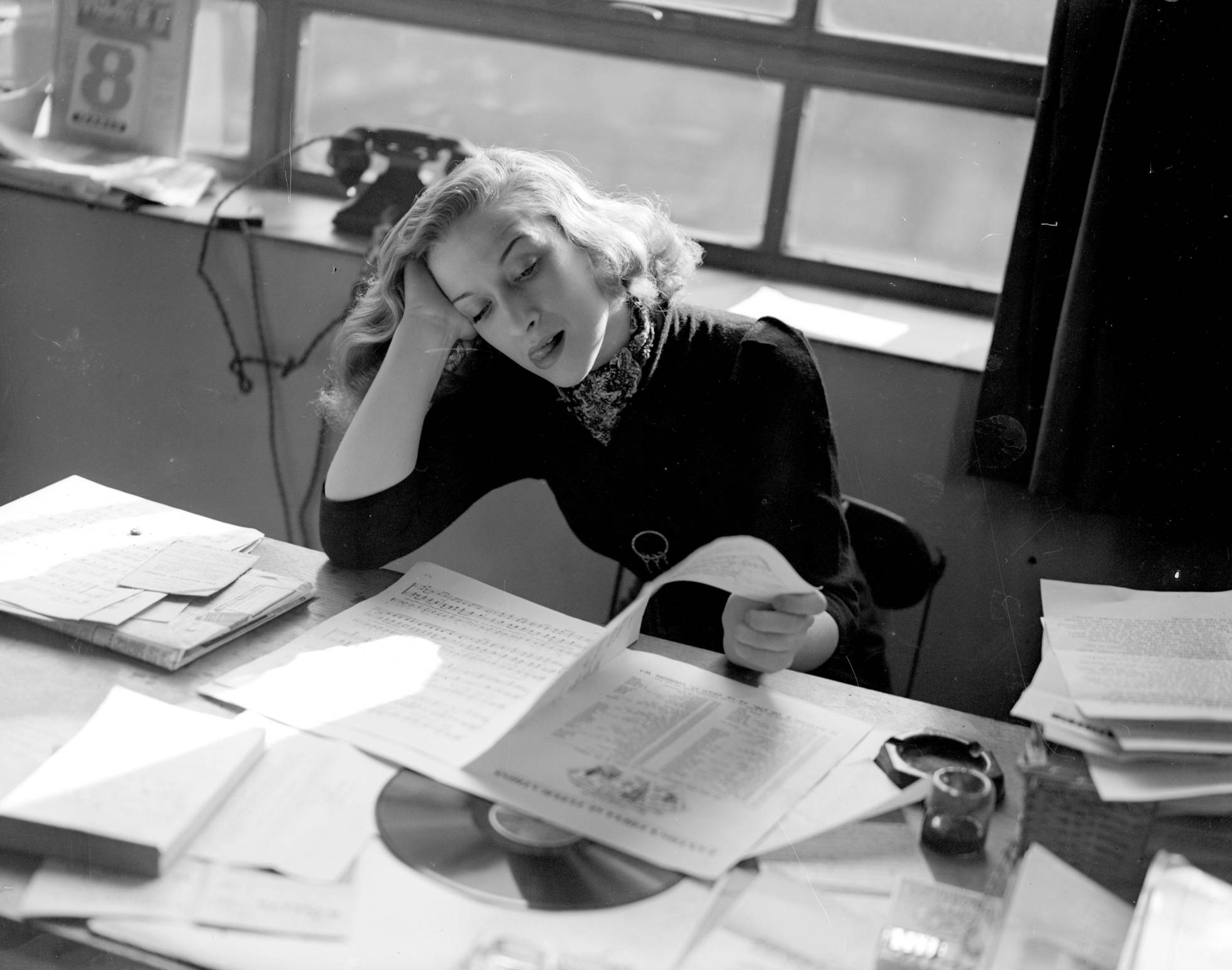 It’s not laziness, it’s just that I’m smarter than average. 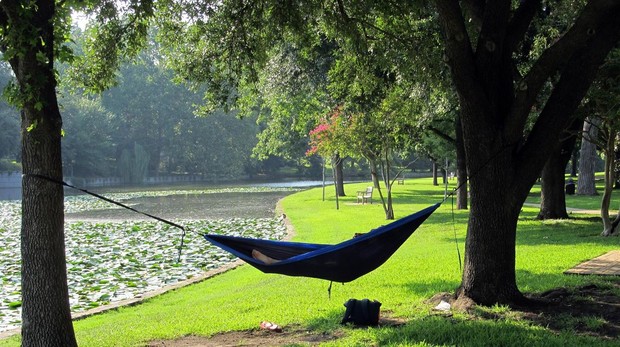 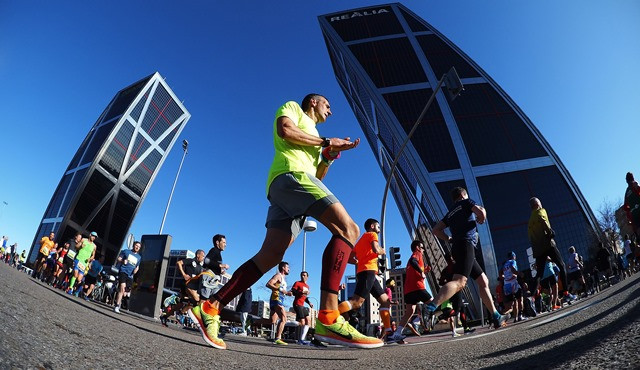